So the challenge was to write 1 one letter word, 2 two letter words and so on. I couldn’t make anything sensible but it was still fun =)

I am insular and ill-suited
to the currents
of your impending bias.
For every occasion
there are equal measures
of repulsion and appeal.
–
The melody of your breath
is mislaid in my lungs.
We are only leavings.
The pitiful, the cryophilic
we gravitate inwards.
–
Do you mock the promontory
for its illustrious height?
Do you beg favor, apology, recompense?
A swarm of raindrops and two headlights
encroach on the darkness.
–
We fizzle and combust,
spells, bone bare
woven together
into prosaic shapes
china teacups and radios.

We want most what we already have,

the enigma draped in ostrich feathers.

if I subtract my faults, I in turn am less.

From one grave to the next,

we shamble hungry and inchoate.

It’s Sisyphus all over again,

the need for redundancies,

the need to need.

All the better to hypnotize you with my friend.

A litany of deceptions, an erosion of hearts

harder and more brittle than the bones that contain them.

Your success is a testament to my failure.

Perhaps we should do away with the game altogether

or we could both participate bereft of desire.

The lack of competition has made winning

more important than ever

only now the lessons are lost.

Take away everything but my failures

lest I become more incompetent than I already am.

We don’t want fair, we want the balance in our favor,

to be the exception in exceptional.

Take my life at your own risk,

become me, endure with me

These are the unknowns,

But does not merit.

These are the gods of

Apples in a quantum riot.

Thrust into a flaccid rind.

The rule of threes

A rash of clues erupt

Of an intrinsic exile.

Claws its way to the surface,

Bide in the fringe.

Humanity is a condition of guilt,

A disavowal of instinct

We are enslaved to conjunctions,

That mimic and gripe.

This is mostly nonsense I am well aware because I decided to write my thoughts when in a mental stupor. Anyhow I was thinking about bacteria and mushi (primitive ubiquitous creatures with supernatural powers that we can’t see). I was thinking what if humans are just tools? What if our thoughts are actually the cumulative thoughts of all those little nothings that exist inside of us? Without bacteria nothing would exist, so I thought what if they are gods, what if they are significant and we are by comparison a no-thing? No drugs were involved in the production of this poem lol I am exhausted and felt like going with the madness.

Woman in paisley print skirt: Are you suffering from some type of intellectual deficit? A fetish? A death wish? A complex perhaps?

Man in flannel jacket: I don’t have time for your antics we’re all headed for the same place just push the damn button would ya?

Woman with striped umbrella: (whines) Why hasn’t he returned my calls?

Woman in polka dot sweater: They never do. It’s entirely personal and you should take it as such. Whoever heard of post-coital amnesia anyways?

Man in flannel jacket: The Venusians are a contentious lot.

Man with messenger bag: Does she love me? Has she found someone else? Maybe I should workout. Get a job. Move out of my parent’s basement.

Man in flannel jacket: There are bats in the eaves. A wake of revulsion.

Woman with striped umbrella: His aorta holds as a latch so that nothing given can depart unblemished.

Woman in polka dot sweater: Love is only fatal when dormant.

Teen boy on phone: Archetype of Death 3 premieres on Wednesday. I’ll bring the sleeping bags. (I am so fucking lonely)

Man with messenger bag: Her smile is like a halo split and inverted.

Woman in paisley print skirt: Does she still speak to the Devil?

Man in flannel jacket: She speaks always on his behalf. Pity is a terrible mother.

Man in flannel jacket: Is that blood?

Woman in paisley print skirt: From the Apocalypse? That was last week…it’s probably just lipstick or a spot of red paint.

Woman with striped umbrella: What’s the weather like? I haven’t been outside since this morning.

Woman in polka dot sweater: It’s as cold as a serpent’s kiss and twice as venomous.

Old man: (shouting) For heaven’s sake Eleanor what time is it?

Old man: (still shouting) Is that vodka in your purse woman!?

Eleanor: (giggles) It’s vinegar to keep the flies off.

Woman with stripped umbrella: (shrugs) What’s the use he never listens.

(I have a lot of trouble understanding what I am hearing when in a crowd so I thought I’d have a little fun with that. I also recently read a story written in complete gibberish. Anyone else want to give it a go? Post a link in the comments.)

This submission is for: Tale Weaver’s 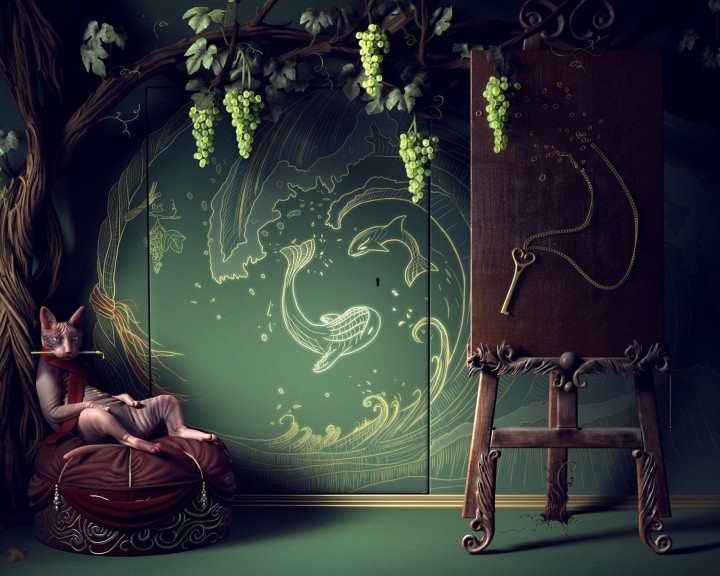 Painting keys into the palms

From the bough of a restive elm

The stars are my familiars

They anoint and endow me

I drink of ink and ether equally

My eyes are composed of dark matter

They remain poised beneath felt lashes

Dare me and I’ll unmake the world

I surrender savage and Mesozoic

To instincts and intuitions

Bone dragons nest inside my entrails

My language is unpalatable

With the nectar of a foreign tongue

I know the dusk, I have borne her

Is lined with violets and chrysoprases

She adjusts her moods to my psychophoria

But would never knowingly

My first attempt at a Jabberwocky I was inspired by the posts below =) I was insanely busy on Sunday (my daughter starts kindergarten today!) so I had to write this on the tram on the way to the shopping center to get school supplies lol  Psychophoria is one of my favorite words but it’s not a word exactly because I made it up (it is derived from psychosis and euphoria so happy madness)