While Aurelian’s human form bore characteristics that were not altogether human and that made him appear “wolfish” even when dressed, Ira aka tortoise appeared remarkably untortoise-like. Willa had expected him to be bald, short of stature, with a hooked nose and proper English spectacles. Even if he was not old she had expected him to appear wizened, bookish and to have an oddly elongated neck. This was not the case, thankfully, indeed Ira appeared quite “normal”. Perhaps, it could even be said, that he was handsome but beside Aurelian it was not quite so apparent.

Ira was very nearly the same height as the wolf, mere centimeters separated them. As for their physiques the tortoise was not built like a warrior and was she thought a bit lanky (perhaps from hauling her around for hours every day). His hair was brown, too short for an aristocratic ponytail and strait with an enviable if not troublesome thickness. His eyes were green and appeared in good working order for he neither wore glasses nor squinted near-sightedly at their faces. His nose was not hooked as she has presumed, his jawline was very distinct, and his chin was without cleft (as was Aurelians). His clothing was simple, bland, and much too brown to be stylish. He was neat, obsessively so, in fact his clothes had not the slightest wrinkle or stray hair. ‘He really is an old man.’  She thought amused. Aurelian was equally surprised for he had presumed tortoise to be elderly, not a young man such as himself. An annoying development indeed. Though Ira was, in comparison to himself, rather ordinary and very tame in appearance save for the strong jaw, which was surprisingly masculine, he knew himself to be in competition.

“Oh don’t you look handsome…” Willa said her words causing Ira’s head to turn forcibly to the side so as to avoid eye contact. “Pfft…nonsense…I look like a school teacher…isn’t that what you are really thinking?” He asked eying her without turning his head. “While that is true…it makes you no less handsome and so young…you really can’t be much older than me…” She said in wonderment, it would take some getting used to, tortoise was nothing as she had envisioned him. How embarrassing to think of what he might have seen!? “Oh Aurelian you’re breath-taking…the clothes fit wonderfully I had hoped they would…but I couldn’t be sure…” Willa said but before the wolf could answer Ira interrupted. “My God he’s gorgeous…quick turn around Princess so that I might take leave with him….” Tortoise had a terrible habit of speaking without inflection and so it was a moment before Willa caught onto his sarcasm. Once aware of the joke, however, she couldn’t help but snort a girlish/rather undignified laugh.“You’re terrible…don’t make fun of me like that…I was not gushing….I was admiring the clothes…and did I not just say you were handsome as well really…you have the most peculiar sense of humor….” She teased and then turned to Aurelian who was also grinning though it was in response mostly to the girl’s childish laugh.

“Your attire might make it difficult to travel long distances…” Aurelian said after a moment looking at the long, floor length velvet gown Willa wore as a matter of custom. “Oh this? I almost forgot…” She said smiling as she detached the long skirt from her bodice. Underneath her dress she wore riding pants and knee length boots, perfect for distance and difficult terrains. The skirt she rolled up and stuffed into her bag. “Is that better?” She asked clearly pleased with her cleverness. “Yes that’s perfect….I am impressed…you really did think of everything…” Aurelian said but tortoise only shook his head in relief having nearly had a heart-attack when the Princess unashamedly tore off her skirt. “Of course…I have been looking forward to our little adventure…so if you don’t mind I would like to get started…I do have to be back by nightfall…”

Aurelian knew the forests well, every nook and cranny of the castle grounds and so long as he escorted them no animals would approach. Indeed Willa found the forest almost alarmingly quiet but it was only a passing thought for so struck was she by the picturesque landscape tumbling wildly in every direction. There were rivers, trees that would have dwarfed modern skyscrapers, ponds brimming with lotuses and lily pads as delicate and white as a Geisha’s throat. For hours they walked bits of conversation interrupted with girlish exclamations, a straying hand meant to guide her intercepted by a guardian determined that she should remain untouched.

When they finally stopped for a picnic the absence of melody caused Willa to feel uncertain. “I know these forests are abundant with all manner of beast and yet I have neither seen nor heard anything that would suggest life beyond this circle..” She said to which tortoise regarded Aurelian with an unusually cold gaze. “There is a predator in our midst Princess…the animals will not announce their presence so long as we remain in his company….” Ira answered to which the wolf offered no objections or excuses. “He is right I am afraid…I am a wolf even as I appear before you a man….it is the natural order of things…does it disturb you Princess?” Aurelian asked smiling when he looked down at his lunch which was largely meat. “I see that you do understand…” He said returning his gaze to the girl. “I was afraid the blood would get all over your clothes…so I cooked it….” She explained looking apologetic. “I am glad you did…I doubt even you have the stomach to watch me eat raw meat….but you have not answered my question….” He asked again and she looked at him squarely this time, she would not avoid him. “You have given me no reason to fear you…and encase you would ask being a wolf is not cause enough…you have been nothing if not a gentleman…” She smiled reassuringly. “ I do find the stillness of the forest unnerving but that is nothing you can help…and perhaps I am just as much to blame for it…men are predators as well and far more vicious than wolves according to my history books..” She said solemnly her response causing Aurelian to blink in surprise.

He’d never expected to like the human girl, not really, but she did have, he observed, some finer points. “You are wise beyond your years….I suppose I must give some credit to your guardian for despite his prejudice against me, he has educated you well…” He said just as Ira was taking a drink of water. “My dislike of you is mostly personal…I trust a wolf to be a wolf but you…I know not your schemes but I know that you scheme…” Ira answered choking a bit but regaining his composure quickly.

“Have I been so vague about my intentions? Then I shall speak of them now….” The wolf said wiping his mouth. “Hunting has diminished the numbers of my kingdom….wolves are plentiful but wolves that walk as men are near extinction….our dual natural means that we are particularly curious…many of my kind have sought human contact and many have died in the endeavor…I fear if we were to reveal ourselves we would be exterminated as a threat…and yet there are so few of us that if we do not seek human contact we will perish…” He said his words causing Willa’s eyes to soften but Ira’s expression remained grave (though respectfully attentive). “My father took a young wife…he is old now and it is expected…no it is far more serious than mere expectation…it is mandatory that I marry soon….like you I must marry of royal blood but there are no royals left of my kind outside of the members of my own family…in order to produce an heir I must take a human bride…” He said causing the tortoise’s stoic mask to crack and indeed the man visibly flinched.

“You don’t mean to make Willa your wife?” Ira asked incredulously, ignoring the pinch in his own heart. Never had the Princess had a suitor and thus never had he to worry that he might lose her. “I cannot deny that she would make a fine wife and mother…I would not even mind having you around….tortoise…” He answered pausing momentarily to let the compliments sink in. “But I am a gentleman and we have only just met…perhaps Willa does not even fancy me?” He asked turning to the girl who was blushing ferociously and shredding up her bread roll as if a napkin. Ira placed a hand on top of the girl’s trembling one as if to steady her or perhaps it was himself that he meant to console. “The kind of love of which you speak…she is inexperienced…do not tease her so…” Ira answered as the girl was simply too stunned to speak for herself. “You are right of course…forgive me Willa you do not need to answer me now….” Aurelian said his deep, rough voice drawing her eyes up. “No you have answered Ira’s questions honestly…it is only fair that I should answer yours…”

(It got quite long sorry!) 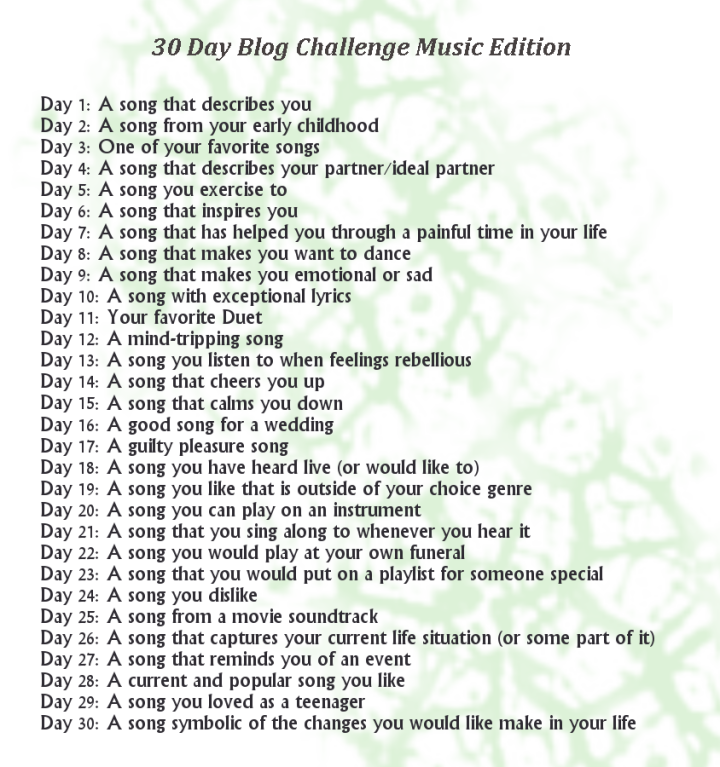 My music tastes are pretty eclectic so I like music from a wide variety of genres. Being from the South country music is very popular but I have never particularly enjoyed it.  The exception is Dolly Parton (I know she is very country) but her singing just breaks my heart. I want to be clear I do not like the Miley Cyrus’ version of this song it lacks emotional depth and maturity. No offense to her but this song is so beautiful because of the emotion Dolly’s tremulous voice conveys.